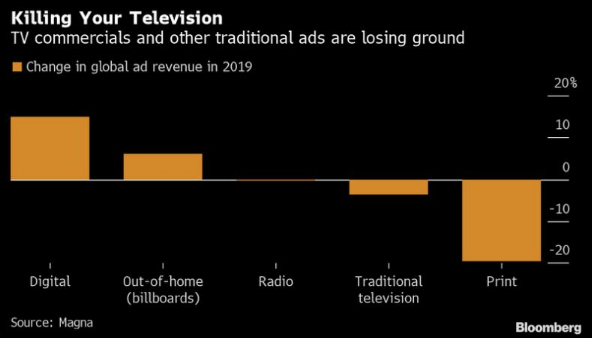 Global TV advertising sales fell almost 4% in 2019, the steepest drop since the depths of the economic recession in 2009, in the latest sign that advertisers are following viewers to the internet.

Declines in TV viewership have suppressed the medium’s advertising dollars, according to research firm Magna Global, which released the data as part of report on the global ad business. Viewership fell sharply in Europe, compounding the trend in the U.S., China and Australia, according to Bloomberg.

Traditional television has hemorrhaged viewers in recent years, as people trade cable and satellite packages for online services Netflix and YouTube. Cord cutting has been especially pronounced in the U.S., the world’s largest media market, and should continue to accelerate as media giants Walt Disney Co. and AT&T Inc. introduce their own streaming services.

Even with the retreat from TV, overall ad revenue climbed for the 10th year in a row. The industry was buoyed by digital sales, which rose 15%.

The TV business had previously eked out gains in advertising sales by charging higher prices. And it’s still seen as a useful medium when marketers need to reach a large, live audience. Technology companies excel at allowing advertisers to target individuals who have searched for a sweater on Google, liked a movie’s page on Facebook or looked for detergent on Amazon.

Yet declines in viewership now outpace the rise in TV ad pricing. So-called linear TV viewership has been declining by 10% in the U.S., Australia and China for a few years, according to Vincent Letang, the author of the report. European TV channels suffered drops of 7% to 8% among viewers age 18 to 49, worse than the 5% decline last year.

Radio advertising sales stabilized in 2019, while the out-of-home category -- namely, billboards -- was the only traditional media to actually grow. That’s due in part to technology companies, which use billboards to tout their services. Facebook, Apple, Amazon, Netflix and Google all rank among the 20 largest out-of-home advertisers.