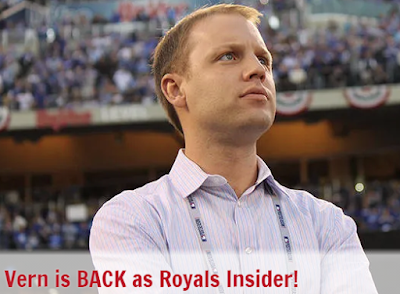 Fans will hear a familiar voice asking questions to new manager Mike Matheny after Royals games in 2020, according to kansascity.com.

Entercom's KCSP 610 AM has announced Josh Vernier will return as the station’s Royals Insider, a job he had from 2013 through the middle of 2018.

“Yes, I’m excited to be back with a team that I know well, a fan base, I know pretty well, and with, you know, improvement likely ahead with the team. I would say excited is a good word,” Vernier said.

In July 2018, Vernier joined Ron Hughley for the “Show and Vern” mid-day show on KCSP. Last month, Hughley announced on Twitter that he had been let go by the station.  KCSP is planning to roll out a new mid-day show at a later date.

Last week, the station announced it will become “the official broadcast partner” of the Chiefs in February.

KCSP also has the broadcast rights to the Royals, which includes pregame and postgame shows to be hosted by Vernier. Last year, Cody Tapp was the station’s Royals Insider. His Twitter bio shows he is still with the station, but KCSP hasn’t said what Tapp’s role will be going forward.

As for Vernier, he’ll be glad to be back at Kauffman Stadium.

“I missed the interaction with the listeners, to be honest,” Vernier said. “The listeners and the people that worked at the stadium, I would say. The players, the managers, the people in the front office are all great, but you know they’re they’re doing a job, they’re selling you something at all times. You know the fans and the people that work there are all just hoping to see a win. And it’s always nice to see that optimism before the game and then to deal with whatever the attitude is after the game.”
Posted 2:37:00 AM