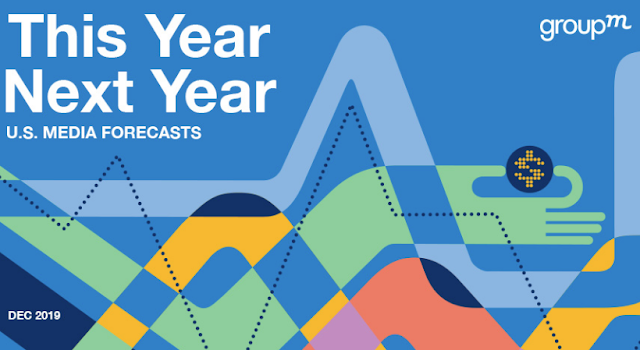 According to GroupM’s U-S media forecast for 2020, this will mark a fourth consecutive year of solid mid-single-digit growth for the industry on an underlying basis. Taking out directories and direct mail makes the health of the industry look even stronger, with a +7.6% underlying growth rate for 2019, although including political advertising in all years brings growth down a few notches to +3.8% all in. However we look at it, growth has been robust relative to the general economy, which is generally decelerating on an underlying basis.

2020 still looks solid; GroupM us forecasting +4.0% growth next year. They expect some softening next year as the economy reverts toward normalcy after a period of growth likely supported by factors including the 2017 domestic tax cut, an expanding federal deficit and low interest rates. As the effects of these fade, heightened trade barriers should concurrently become a drag on the overall economy.

Digital-first marketers are likely driving much of the industry’s recent growth. GroupM previously written about the emergence of massively scaled digital brand owners whose businesses are endemic to the internet. They point to Facebook, Amazon, Netflix,Alphabet, eBay, IAC, Uber and Booking.com as eight companies that are likely to spend more than $30 billion on advertising globally this year. Most of this spending will go into their home market, the U.S., adding billions of incremental spending every year into the domestic advertising economy.

Overall, GroupM's best “feel” for the advertising market is to forecast a lower growth rate beyond 2021, and they incorporate a +3.0% expectation for subsequent years.