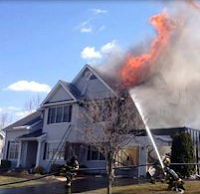 WPLR 99.1 FM New Haven radio personality Chaz saved a dog Tuesday morning from a house fire in after kicking in a door!

And he’s  being called a hero after he spotted a home on fire in and kicked in a door to save a dog.

The fire at the multi-story home in was so intense that the flames spread to nearby brush, causing the blaze to be upgraded to a second alarm.

Chaz, of the popular morning show on WPLR, Chaz & AJ in the Morning, spotted the fire and noticed a dog was inside the home. He then kicked in the door, checked to make sure no one was inside and saved the dog's life.

WPLR's Chaz save dog from fire

It's unclear what caused the fire, but officials said the blaze will remain under investigation.
Posted 8:58:00 AM