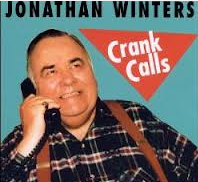 Jonathan Winters, the rubber-faced comedian whose unscripted flights of fancy inspired a generation of improvisational comics, and who kept television audiences in stitches with characters like Maude Frickert, a sweet-seeming grandmother with a barbed tongue and a roving eye, died on Thursday at his home in

According to an obit at nytimes.com, Winters enlisted in the Marines before finishing high school and during World War II served as a gunner on the aircraft carrier Bon Homme Richard in the Pacific.

After the war he completed high school and, hoping to become a political cartoonist, studied art at and the Dayton Art Institute. In 1948 he married Eileen Schauder, a native who was studying art at . She died in 2009.

At the urging of his wife, Mr. Winters, whose art career seemed to be going nowhere, entered a talent contest in with his eye on the grand prize, a wristwatch, which he needed. He won, and he was hired as a morning disc jockey at WING 1410 AM (now ESPN Sports), where he made up for his inability to attract guests by inventing them. “I’d make up people like Dr. Hardbody of the Atomic Energy Commission, or an Englishman whose blimp had crash-landed in ,” he told U.S. News and World Report in 1988.

After two years at a television station, he left for in 1953 to break into network radio. Instead he landed bit parts on television and, with surprising ease, found work as a nightclub comic.

A guest spot on Arthur Godfrey’s “Talent Scouts” led to frequent appearances with Jack Paar and Steve Allen, both of them staunch supporters willing to give Mr. Winters free rein.

Here's a routine featuring Winters and the late actor Bob Crane.  Crane was a radio personality on KNX, LA at the time.