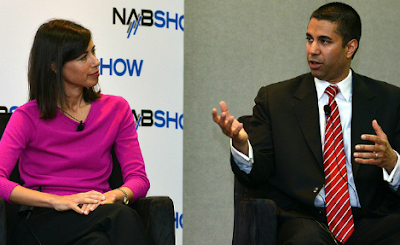 They talked of some of the flash points ahead as well as offer praise for stations’ role in warning and informing East Coast residents on Hurricane Sandy, particularly as wireless and mobile services were down, according to variety.com.

Rosenworcel, mentioned as next possible FCC Chair, even made mention of rising cable bills — including her own — as something that she hopes the marketplace responds to but that the commission should be “watching closely.”

The idea that rising rates are sending consumers to cut their cable and rely, once again, on over-the-air antennas is music to the ears to many stations. But asked afterward about the senators’ letter, Rosenworcel offered a polite signal wave of her hands that made it apparent she was not about to comment.

Early in the session, both — Rosenworcel, in particular — emphasized that broadcasters have an obligation to serve the public interest.

According to broadcastengineering.com, the admonition to be cautious comes from the fact that Rosenworcel called it “eye-opening” to hear the stories of broadcasters who communicated lifesaving news and information in the wake of Superstorm Sandy during agency sponsored public hearings.

One was left wondering how the top level of the very agency responsible for regulating TV broadcasters could need to have its “eyes opened” about the vital role broadcasters historically have played in keeping the public plugged in to critical warnings and an exemplary record of fulfilling their obligation to serve the public interest, especially when lifesaving information is needed — even in the face of personal danger.

Both commissioners made pro-radio statements about FM chips in cell phones. Earlier in the day, Verizon CEO Lowell McAdam said that radio on cell phones is a very small issue for his customers. He said they were more interested in streaming customizable audio.

The commissioners saw it from a different perspective. Commissioner Rosenworcel indicated as consumers use FM chips in their phone more osten, they'll demand phones with FM chips. Pai believes that from a consumer perspective it would be helpful to have FM chips in phones, "especially during emergencies."
Posted 5:39:00 AM