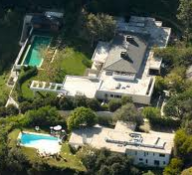 Ryan Seacrest became the latest celebrity targeted by a "swatter" when a hoax 911 call reported armed men were shooting their way into the "American Idol" host's home Wednesday.

When police arrived at Seacrest's home at about 2:40 p.m., they found Seacrest there, but no group of armed men, a police spokesman said.

According to CNN, after speaking with Seacrest and his security team, the officers left.

These prank calls earned the nickname "swatting" because law enforcement agencies sometimes would send SWAT teams to respond to the false emergencies. In most cases, though, SWAT units are not involved. Still, officers rush to the scene with guns drawn.

Ironically, earlier on the same day Russell Brand phoned in to “On Air with Ryan Seacrest” on KIIS 102-7 FM to talk the second season of his talk show Brand X as well as his recent swatting incident.


After being the latest victim of a swatting prank, Russell joked: “If all swatting attacks are this unnoticeable I’m ready for war because I didn’t even know it had happened, I still don’t know what a swatting attack is!”
The funnyman continued “I wasn’t [there] I was out,” adding, “there’s always some helicopters and police at my house anyway because of my involvement in other activites so I didn’t notice any additional ones.”

Brand continued to joke: “Swatting, I don’t like the word very much. Swatting, obviously what you do to insects or a passing bottom.”

So was Brand upset about the prank?

Nope! In fact, the comedian admitted: “I think if I I were a teenager I’d definitely do it.”