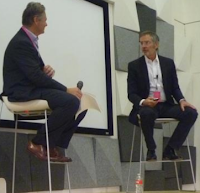 According to bizjournals.com, the summit focused on trends in emerging media, entrepreneurship and digital innovation.

Pittman, perhaps best known as the founder of MTV, kicked off the event as the early-morning keynote speaker. Here's a quick overview of some of his remarks, most of which are paraphrased: