“Within the Broadcast group, we continue to see core revenue growth. On a same-station basis and excluding political advertising, revenue was up 6%, with television up 7% and radio up 5%.”

For the second quarter, revenue from radio stations increased 2.3% to $19.9 million, or 4.7% excluding political revenue. 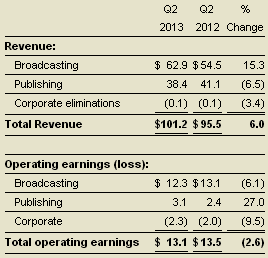 National advertising revenue, excluding political, decreased 4.9% to $1.8 million, primarily due to a decrease in media advertising.

Operating earnings from radio stations were $3.8 million compared to $4.4 million, a decrease of 13.8% or a decrease of 19.0% excluding acquisition costs in both years.

Radio operating expenses increased 7.1%, or 9.3% excluding acquisition costs in both years, primarily due to employee-related expense increases and the impact of credits received from an industry-wide music licensing fee settlement in 2012.

Note that unless otherwise indicated, all comparisons are to the second quarter ended June 24, 2012. Same-station comparisons exclude the operations of NewsChannel 5 in , which we purchased in December 2012.

In the second quarter, basic and diluted net earnings per share of class A and B common stock were $0.13 in both years.