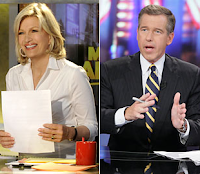 According to media writer Hal Boedeker at orlandosentinel.com, Sawyer and the ABC team posted a razor-thin win over Williams and NBC in the 25-to-54 age group, which is most important to news advertisers.

NBC, however, rounded up its count to 1.9 million and declared a tie with ABC. And that proves that ratings can be read several ways.