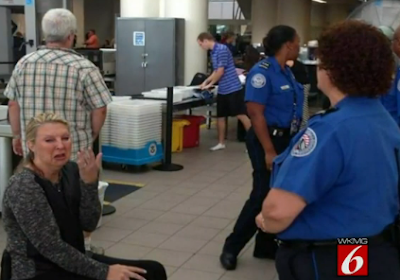 A popular radio host says a recent security screening at left her feeling humiliated because she is confined to a wheelchair.

WTKS Real Radio 104.1 FM's "Jana Banana" said she was touched inappropriately by TSA agents and it isn't the first time she's had problems at the airport.

A picture posted on her public Facebook profile shows her seemingly distraught after the screening, with an explanation saying, "I was detained, interrogated and molested by 6 TSA agents and 3 bomb explosive experts for over and hour...I've never felt so humiliated."

Her fellow radio hosts talked about her experience during the "Philips Phile" afternoon drive show.

"The more it went on, the more upset she got," said Jim Philips during the show. "You could see her in emotional distress, and who wouldn't be."

Her husband told Local 6 by phone Thursday evening it happens every time she flies. Because she can't walk through the body scanner or metal detector, TSA policy dictates she must get a pat-down, that she claims was uncomfortable.

"The TSA agent touched her, only where her husband and her doctor do," said Jack Bradshaw, another personality on the radio show.

Hundreds of comments on her Facebook page expressed outrage over the situation and TSA's policies regarding people in wheelchairs.


After the security screening was over, she said she missed her flight.

Tom's Take:  Those who know Jana will  say she is the nicest, most-positive lady you could meet. This is an outrage.
Posted 6:01:00 AM