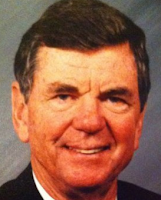 He was 78 and had neuroendocrine cancer. According to his obit at nctimes.com.

As a young man, Dan McKinnon served in the Navy as a helicopter pilot. He is credited with 62 “saves” on land or sea, which still stands as the Navy’s peacetime helicopter rescue record, according to an account by his daughter Lisa.

In 1962, Dan and Mike McKinnon purchased the struggling San Diego radio station KSON. Switching to the country music format, they built it into a successful enterprise. In 1977, Dan McKinnon was president of the Country Music Association in Nashville. He also served on the National Association of Broadcasters board of directors, according to his family’s account.

The broadcasting interest came by way of family. His father started the San Diego Daily Journal newspaper in 1944 and owned the La Jolla Light, the Coronado Journal and radio station KCBQ, first known as KSDJ.

“We grew up in a journalism family,” said his younger brother, Mike. “He just loved San Diego. He was passion about community involvement, and he loved broadcasting.”

McKinnon made an unsuccessful bid for Congress in 1980. The next year, he was tapped by then-President Ronald Reagan to lead the federal Civil Aeronautics Board, which oversaw airline routes and fares.

His work at that agency included overseeing the Airline Deregulation Act, which eliminated the need for the board. McKinnon presided over the agency’s closure in 1984.