Not For Long, Laura Ingraham Off Radio

Conservative talk-radio host Laura Ingraham has announced that she’s off the air – for a brief period anyway. 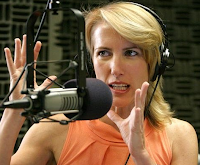 “After more than nine years with the distributor Talk Radio Network, I decided it was time to move on. After much thought and reflection, I have decided to pursue my first loves – modern dance and the xylophone. In the highly unlikely event that these efforts do not prove fruitful, I intend to return to radio,” she said in an announcement posted on her website.

“Seriously – to the more than 300 stations that carry the Laura Ingraham Show and to all my loyal listeners, I feel the time is right to expand and retool my radio program and to explore other syndication options, which I am now actively pursuing. During this brief hiatus, my team and I will continue to deliver thought-provoking and entertaining analysis via my website lauraingraham.com and twitter @IngrahamAngle. And of course, I’ll be doing my regular appearances on Fox News. I anticipate making an announcement concerning the show in the near future. Stay tuned!”

There has been no comment available from TRN concerning Ingraham.

Ingraham is the second major personality to move away from TRN recently.

As WND reported, Michael Savage left the airwaves briefly after a long court battle with TRN. He returned to the air with a new syndicator and new time slot.

“The Savage Nation,” which formerly aired on TRN from 6 p.m. to 9 p.m. Eastern time, Monday through Friday, now is airing from 9 p.m. to midnight, Eastern, via Cumulus Media Networks.