A lot of people were offended by Michael D'Antuono's painting of President Obama (see video) that resembled a crucified Christ — but not Glenn Beck. 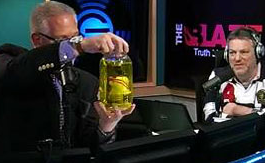 Arguing in favor of D'Antuono's first amendment right to paint whatever he likes, Beck made his own (even more controversial) "artwork."

His creation is titled "Obama in Pee Pee," which sums it up nicely: It's an Obama bobblehead doll dipped in a jar of what Beck initially claimed was his own urine (but which he later admitted was just beer).

If Beck's artwork hasn't blinded you with outrage/nausea, you might want to consider buying it. He's offering it for $25,000.