Ninety-three dollars for a book?

According to a story by Ben Fong-Torres at sfgate.com, that was the original price for a volume about the phenomenon that was "Boss Radio," a Top 40 format that swept the nation in the mid-'60s, and its flagship station, KHJ in "Boss Angeles." Its first program director, Ron Jacobs, published "KHJ: Inside Boss Radio" 10 years ago, and, in tribute to its dial position, put a price tag of $93 on the 455-page book.

LISTEN TO ONE HOUR SAMPLE OF 93KHJ, Click Here.

It's rich with his memos to his jocks, surveys and behind-the-scenes stories about DJs and promotional stunts, and about executing a format that was lean and mean, but also fun and innovative. 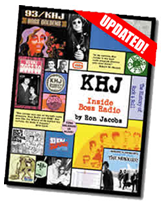 Jacobs says he regretted the price, which was set with an exclusive, radio industry readership in mind.

For anyone interested in the format, conceived by the late Bill Drake (former DJ and PD at KYA in ), and a great success on KFRC, this is a must-read, writes Fong-Torres.