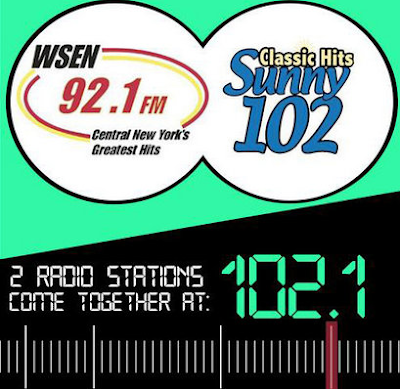 Galaxy Communications announced Monday that WSEN 92.1 FM is 'merging' with WZUN Sunny 102.1 FM March 28. For the next seven days, the stations' combined programming will be heard on both frequencies, 92.1 and 102.1 FM.

Classic Hits WSEN had branded itself as playing "Central New York's Greatest Hits. " The oldies format will be mixed in with Sunny 102, which has been playing "classic hits" for years.

Sunny 102 is also well-known in the Syracuse area for switching to Christmas music every year as a sponsor for Lights on the Lake during the holiday season.

"We are thrilled to be able to continue the legacy of WSEN by combining it with Sunny 102 to create a superstation," Levine explained in a press release. "We've expanded our playlists to incorporate a tremendously wide variety of music. Plus, we preserved several jobs for some of Syracuse's best known radio personalities. It's a great day."

WSEN's Gary Dunes is now on the air with Big Mike & Cindy in the morning, and John Carucci has joined Rick Gary in the afternoon from 3-7 p.m. WSEN DJ Diane Wade will now broadcast from the Sunny 102 studios on Walton Street weekdays from 12-3 p.m.

According to syracuse.com, Family Life Ministries acquired WSEN and WMCR Mix 106.3 FM in Oneida from the Leatherstocking Media Group for $2.5 million at the end of December.
Posted 3:25:00 AM