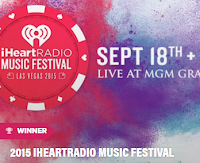 iHeartMedia has announced that the 2015 iHeartRadio Music Festival has been awarded the winner of the Eighth Annual Shorty Award for The Best of Social Media at a Live Event.

In addition, the company's social engagement for the 2015 iHeartRadio Music Awards earned a Gold distinction as a finalist in The Shorty Awards Live Events category.

The Shorty Awards honor the best of social media usage and activation across the web. Each year millions of submissions for both individual influencers as well as organizations producing engaging content for fans on sites including Twitter, Facebook, YouTube, Snapchat, Instagram and more are nominated for awards. "The Best in Live Events" Shorty Award category honors the best use of social media to elevate events including concerts, marches, rallies and meetups.

The 2015 iHeartRadio Music Festival generated a record 6.5 billion social media impressions, putting the festival's social activity ahead of football's big game halftime show for the third consecutive year, by introducing unique and innovative new ways to engage both fans and artists across social platforms. The official hashtag #iHeartRadio trended No. 1 worldwide, No. 1 in the United States and across more than 80 cities. More than 10 topics trended locally, nationally and worldwide across Twitter throughout the festival weekend.
Posted 3:06:00 AM