Hulk Hogan Sez Gawker Pub 'Scared The Hell Out Of Me' 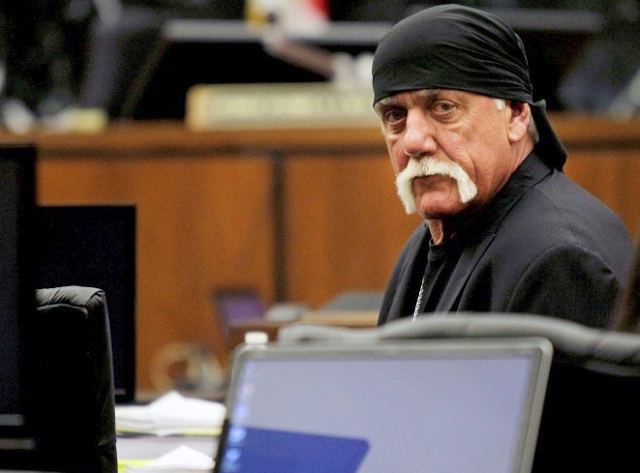 He’s faced down Andre the Giant and the Iron Sheik, but Hulk Hogan says the stare he got from Gawker publisher Nick Denton in court is what really terrified him.

“He scared the hell out of me,’’ Hogan told The NY Post in his first interview since a Florida jury awarded him $140 million in his lawsuit against Gawker, Denton and ex-editor A.J. Daulerio.

“Denton and I had a stare-down. He scared me staring at me, man. He just sat there staring. It was right after his cross-examination. He stood up and stared. It was like he was going to call me out at ‘Wrestlemania,’ Yikes!”

“They think that just because you have Facebook or Twitter, you crossed the line between normal person to celebrity status.​ ​So that means anyone who has anything to do with social media is fair game.

He said that as he heard their testimony during the trial, “I started having, like Oprah has, these ‘aha’ moments. … Everybody’s a celebrity,’ I thought. ‘Oh, my God, they’re gunning for everybody. Everybody is fair game. And then 4-year-olds, too?’” Hogan said, referring to Daulerio’s testimony that he’d post a celebrity sex tape with a child.


“I don’t know if [Daulerio, who posted the video a​s Gawker’s editor in chief​] really understands how wrong he is. I think some type of experience, if this trial didn’t humble him, then maybe picking up trash on the side of the road might.’’

A soft-spoken Hogan ​also ​said he was offered “a large amount of money’’ to settle but decided to stand and fight because, “if I put my tail between my legs, if I take the money but don’t tell the truth or I don’t face [the situation], I’m not going to be able to live with myself. I knew how unhappy I would be. I told my wife, I said, ‘Jennifer, I just got to follow my heart,’ ” Hogan said.