For Rob Johnson, this is either an opportunity of a lifetime or a fall into the rabbit hole that is Clear Channel Atlanta. 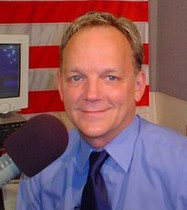 Johnson, a talk show host for more than eight years in Modesto, Fla. (market No. 113), is now manning a morning show in the No. 7 market in the nation on 640/WGST-AM, the troubled news/talk station.

“It’s a big  jump,” he admitted in an interview with Rodney Ho at ajc.com after his first show Monday. He airs from 6 to 9 a.m. “I still have a nosebleed! I was a good match for what they were looking for.”

Johnson has the mellifluous voice of a soft rock DJ because he was indeed once a jock for that type of music station. His opinions are relatively conservative, he says, with a mantra of small, less intrusive government. But he does not come across as angry or confrontational. He uses a gentle, quietly persuasive cadence.

“That’s my natural style and delivery,” he said. “They hired me to make an Atlanta show. It will take some time to understand Atlanta and Georgia, its issues, events and locations. As I become more ingrained and knowledgeable, it will get more local.”

Melissa Forrest, who oversees Clear Channel Atlanta (which includes 94.9/The Bull, Project 9-6-1, Groove 105.7 and 105.3/El Patron, as well as WGST), in an email said, “Rob’s show is designed to be an alternative to typical morning news.  It includes today’s headlines plus commentary and humor from a conservative perspective.”

He replaces Michael Smerconish, the syndicated host who covered mornings from Philadelphia starting in the summer of 2009 after Randy Cook stepped down to re-join Spiff Carner at True Oldies 106.7. Smerconish was clearly a stopgap measure as Clear Channel sought a local host. And now that Clear Channel’s FM properties have stabilized (relatively speaking), “it was time to turn our focus on WGST,” she noted.