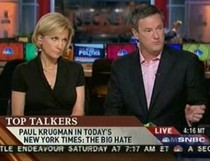 According to a Reuters story, Scarborough said the donations went to his brother and three longtime family friends and he wrongly believed the personal nature of the gifts exempted him from the NBC News policy on campaign contributions.

"This morning Joe Scarborough informed me that he made eight contributions of $500 each to local candidates in Florida between 2004-08," MSNBC President Phil Griffin said in a statement.

"Since he did not seek or receive prior approval for these contributions, Joe understands that I will be suspending him for violating our policy."

Scarborough will return to his "Morning Joe" program on Wednesday.