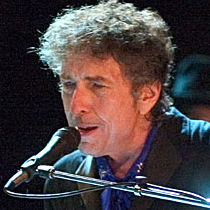 Bob Dylan isn't known for having a love affair with the press, write Sarah Godfrey at tbd.com,  and sometimes when artists don’t love the media (or even if they do), they don’t give members of the press review tickets for their shows. Withholding review tickets for shows is a pretty common occurrence, actually (see TBD’s whiny coverage of being shut out of Lady Gaga’s September Verizon show.)  Usually, in this situation, media outlets either have writers buy tickets, or scrap plans to review the show altogether.

A day before the show, I.M.P, promoter of the D.C. Dylan date, said they’d received word that no press would be permitted at the GWU show. Oh, so no comp tickets? No, no press at all.

The official word was that Dylan’s camp doesn’t allow press at shows “even if they are buying their tickets.”

Even if they’re buying tickets? How would they know if a member of the media bought a ticket, and went to a Dylan show, intending to review it? Are they looking out for people with press hats, ready to bounce them? Or maybe anyone with a notebook? Ink-stained fingers? Carpal tunnel?

Again, it should be noted that the folks at I.M.P. were just passing along a message. And the message from Dylan's management was actually just a slightly bungled, unintentionally funny way of saying that there were no comp tickets or even tickets for purchase specifically set aside for working members of the press.