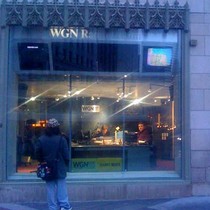 Two people do not a radio station make, although, according to Phil Rosenthal at The Chicago Tribune,  they can unmake an awful lot if left to their own devices.

So WGN-AM 720 is now divorced from Kevin Metheny, the program director whom former Tribune Co. Chief Executive Randy Michaels hired almost two years ago and empowered to leave his imprint on the station. And Metheny presumably got custody of ousted host Jim Laski, whose communication skills were as suspect as the moral compass that led him into a bribery scandal while Chicago's city clerk.

WGN-AM paid a price in lost goodwill for the brusque, seemingly indifferent manner in which Metheny's makeover to boost lagging ratings was executed. It will take more than a pair of returned keycards for the station to open the window of opportunity their exits provide.

﻿Its personalities need to have more fun, find ways to be engaging that don't always involve arguing and remind the audience of its importance. When WGN-AM has thrived most in its 86-year history, it is when it connected to that audience and delivered a product unique not just to Chicago but often all of radio.
Read more here.
Posted 12:04:00 AM