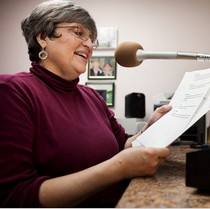 The next time you are standing in New York City waiting for the subway, think of this: The voice that tells you a train is two stations away, and then one station away, is up in Maine, about as far from the Penobscot River as you are from the front of the train. When it finally comes.

The nytimes.com ran a story Sunday about Carolyn Hopkins.  Hopkins has been recording subway public-address announcements for 15 years. In all that time, she has never ridden the subway.

Mrs. Hopkins works from a windowless room in her house with sound-absorbing material on the wall — a tapestry, hung like a painting but covering foam. The microphone and recording equipment came from Innovative Electronic Designs of Louisville, which developed the system that plays her voice in the subway.

You can hear her saying much the same thing in Chicago, Washington, even Paris (where she is the voice that speaks what little English is spoken in the Metro). But subway riders are not the only passengers she talks to.

She has recorded announcements for the Staten Island ferry and most of the major airports in this country, including La Guardia, Kennedy and Newark Liberty.

“Once we walked into the John Wayne-Orange County Airport in California. I had completely forgotten that I’d done the announcements there, and it hit me like, ‘Oh, O.K.’ I was telling myself to watch unattended bags. That’s always a good one.”

She is 62 — “I’m not a young chick anymore,” she told The NYTimes, “but I try to keep my voice from sounding like it’s aged.”