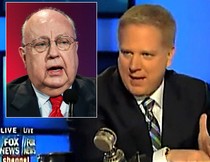 In an exclusive interview with Howard Kurtz at The Daily Beast, the Fox News chief says Obama thinks differently from most Americans, defends Murdoch’s GOP donations, and admits Beck sometimes goes too far.
In the media world, as in politics, having a high-profile target can be a very good thing.

The age of Obama has provided a ratings boost for Fox News as its loudest personalities have relished the opportunity to play offense. Critics, of course, view Fox as an unabashed cheerleader for the Republican Party, an evil media empire spewing propaganda and misinformation at a gullible audience.

But Roger Ailes says his network is just reflecting reality when it comes to the White House.

Ailes brushes aside suggestions that journalists have been much harder on the president as his sliding popularity has led to a Republican takeover of the House. He is far more sympathetic to Obama’s predecessor:


“This poor guy, sitting down on his ranch clearing brush, gained a lot of respect for keeping his mouth shut. I literally never heard an Obama speech that didn’t blame Bush.”

None of this is personal, you understand. Ailes says he likes Obama, who was gracious to him during last year’s Christmas party, and David Axelrod and Valerie Jarrett. He recently had breakfast with Axelrod to discuss Fox’s coverage. But Ailes took an unprovoked swipe at Robert Gibbs, saying the press secretary “is a little big for his britches” and “will end up like that little shithead who worked for Bush”—meaning Scott McClellan, the onetime loyalist who wrote a book criticizing his former boss. Gibbs and the White House declined to respond.