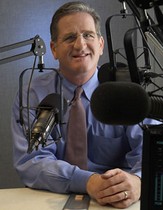 Clear Channel has confirmed in a SEC filing that Clear Channel Radio President/CEO John Hogan will remain with the company through at least January 2014. According to an "Amended and Restated Employee Agreement," Hogan will continue to hold the title of President and CEO of Clear Channel Radio. Hogan's new deal "amends and restates" his last contract, signed in 2008.

The filing also takes note of Monday's announcement of Bob Pittman joining Clear Channel as Chairman of Media and Entertainment Platforms, and that Hogan will now report to the Operating Committee of the CC Board of Directors through Pittman, or the CEO of Clear Channel.

Also in the filing, it is revealed that Hogan will be paid a base salary of $1 million, and is eligible for annual salary increases and performance bonuses which could total 120% of salary.