Madonna's Madame X Radio will showcase music from Madonna's globally-celebrated, multi-award-winning and legendary career, including her critically-acclaimed latest ninth No. 1 album Madame X. The channel will also feature exclusive stories from Madame X and chronicles her legacy, the making of her songs and her commitment to bringing the world closer through the exploration of cultures and music. 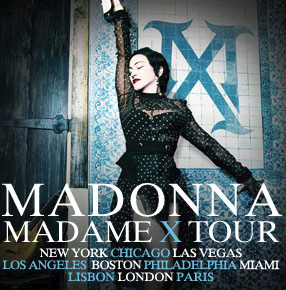 "This channel brings you into the intricate world of Madame X," says Madonna. "You'll learn more about the creative process behind my latest album and gain a deeper understanding of what drives me as an artist and a performer."

"Madonna is an artist who is the very definition of a musical and cultural icon. Her voice, songwriting, performances, and life's work has made her a universal force. Along the way she has created some of the most creative and biggest-selling albums of all time. Our exclusive channel celebrating Madonna is a truly comprehensive deep dive into the music of one of the world's most legendary artists," said Scott Greenstein, President and Chief Content Officer, SiriusXM.

Influenced creatively by living in Lisbon, Portugal over the past several years, Madame X is a collection of 15 new songs influenced by art and politics coming together. Madonna is getting ready to embark on a series of rare and intimate concert performances to take place exclusively in theaters, giving fans an opportunity to see her perform in an environment like they never have before. The Madame X Tour will kick off September 12th.
Posted 1:25:00 AM