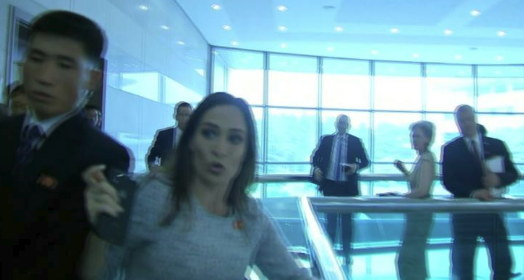 Newly appointed White House Press Secretary Stephanie Grisham received bruises Sunday when she got caught in the middle of a tussle between U.S. reporters and North Korean security officials during President Donald Trump's trip to the Demilitarized Zone dividing North and South Korea.

According to USAToday, the incident occurred after Trump on Sunday became the first U.S. president to cross the DMZ and step onto North Korean soil. Chaos ensued as reporters and photographers jostled to get the best positions to witness the historic moment and security officials tried to rein them in. At one point, Kim appeared to chuckle at the ruckus as people shouted at each other to get out of the way.

After shaking hands on the border, Trump and North Korean leader Kim Jong Un met in a room in the Freedom House on the southern side of Panmunjom.

North Korean guards pushed and shoved members of the U.S. press pool as they tried to block the reporters from entering the room, The Associated Press reported. Grisham was injured and left with bruises in the exchange, which ended when Secret Service agents intervened.


Apparently some of the Korean (North?) security team did not want the US press in the Kim/Trump meeting. New press secretary @StephGrisham45 was not having it, physically clearing the way for the WH press pool by elbowing and pushing aside a security guard.
— Jonathan Karl (@jonkarl) June 30, 2019

A video appearing to show at least part of the incident, which a source described to CNN as a "brawl," was shared on social media.


This is the moment White House Press Secretary Stephanie Grisham got into a scuffle with North Korean security guards who were blocking US journalists pic.twitter.com/WSBkdDw17g
— Edward Hardy (@EdwardTHardy) June 30, 2019