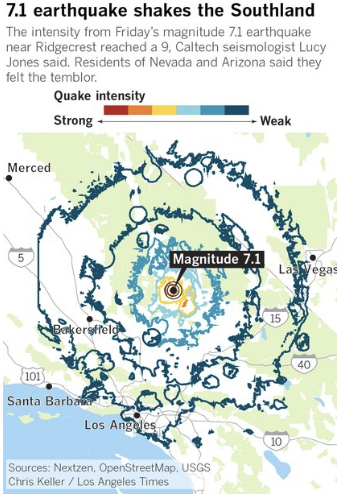 The LA Times reports the quake was centered near Ridgecrest, the location of the July Fourth 6.4 magnitude temblor that was the largest in nearly 20 years. It was followed by an aftershock first reported as 5.5 in magnitude. Scientists said the fault causing the quakes appears to be growing.

Friday night’s quake caused some fires and other damage in and around Ridgecrest and Trona, two Mojave Desert towns shaken by both quakes, said Mark Ghilarducci, director of the California Governor's Office of Emergency Services. The quake was felt as far away as Phoenix, Las Vegas, Baja California and Reno, according to crowd-sourced data logged into the U.S. Geological Survey’s Did You Feel It? website.

About 3,000 residents in Ridgecrest and the surrounding areas are without power after the earthquake, according to Southern California Edison. In Los Angeles, there were no immediate reports of major damage to buildings and infrastructure, according to the Los Angeles Fire Department.

“On behalf of all Californians, I offer my heartfelt support to those affected by tonight’s earthquake near Ridgecrest,” the governor said. “The state of California will continue to offer support to aid residents in the region.” He added that he had requested an emergency declaration from the White House and had activated the State Operations Center in Mather, Calif., to its highest level.

Kern County Fire Chief David Witt said his department had responded to multiple structural fires, but there were no reported fatalities.