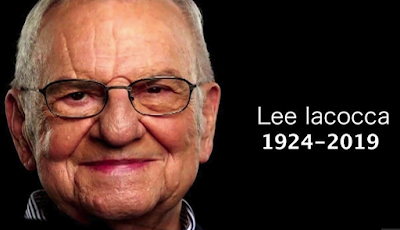 Lee Iacocca, the tough-talking, cigar-chomping auto executive who saved Chrysler Corp. in the early 1980s and became one of America’s first big-time, celebrity CEOs, has died.

He was 94 and died of complications related to Parkinson’s disease, according to The Wall Street Journal.

The son of Italian immigrants, Iacocca came from modest beginnings in Allentown, Pa., had a meteoric rise to the top of Ford Motor Co. until he was suddenly fired, jumped to Chrysler and, with help from the federal government, pulled off a stunning turnaround.

The no-nonsense persona he projected in commercials for Chrysler won him acclaim beyond automotive and business circles. His autobiography and subsequent books became best sellers, he energetically campaigned to restore the Statue of Liberty, and his name became synonymous with straight-talking leadership and, eventually, the highly paid, highflying executive style that defined his era.

In the auto industry, his achievements were almost unparalleled. In the early 1960s, he led the development of the Ford Mustang, which became one of the most successful and influential American cars of all time. Under his guidance, Chrysler came up with a new type of roomy vehicle in the 1980s that it called the “minivan” that revolutionized family travel for a generation of Americans and a decade later the company launched the first car-based SUV.
Posted 1:01:00 AM