Raleigh Radio: What’s Up At CC’s ‘The River’?


UPDATE Sunday 11:30AM: ‘The River’ is airing sweepers this weekend that state ‘The River has dried-up”. Listeners can expect more info Monday 4/1 at 9am. 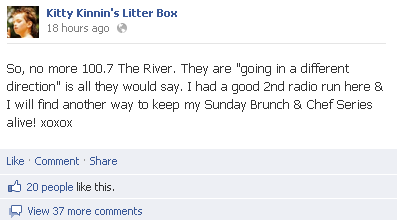 Will The River run dry in Raleigh?  Word came Thursday via morning show host Kitty Kinnin’s Facebook page that she it out. (Although as of Friday morning, she was still listed on the station website).

She cites “different direction” at the station where she’s been morning show Host & Host/Producer of The Sunday Brunch on 100.7 The River in .

The Radio Discussions Board is humming about The River 100.7, which just this week has adopted new calls WTKK.  They were last used by Greater Media-Boston for its former talk station.