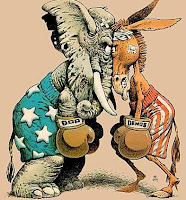 Was it actually the rise of cable entertainment, not partisan news channel like Fox News and MSNBC, that really drove the nation's increase in political partisanship?

Politico reports that's the argument made by professor Markus Prior, who argues in a new academic paper,

"The culprit turns out to be not Fox News, but ESPN, HBO, and other early cable channels that lured moderates away from the news and away from the polls."

Prior says that while cable news channels may be partisan, very few people actually watch them, no more than about 10 to 15 percent of the voting age population. By contrast, he says that in the 1960s and '70s, quote, "even people with little interest in news and politics watched network newscasts because they were glued to the set and there were no real alternatives to news in many markets during the dinner hour."

The cable news channels needed a way to draw viewers from the growing entertainment options, and therefore made news itself more "entertaining" with partisanship and bombast.