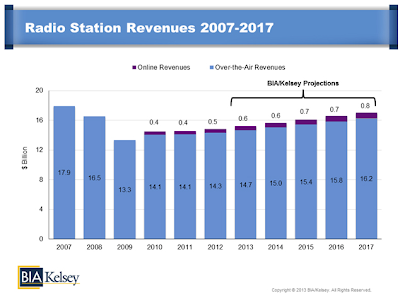 Radio industry over-the-air revenues inched slightly upwards in 2012, increasing to $14.3 billion, a 1.5 percent change from the year before, according to the first edition of “Investing In Radio® Market Report,” a quarterly report published by BIA/Kelsey, adviser to companies in the local media industry.

That slight change is due in large part to the sluggish overall economy for 2012 and the increased competition radio faces in the local media market. The company also notes that station revenue mix will continue to shift somewhat and income from online advertising is expected to rise at a rate of about 10.8 percent annually over the next five years versus 2.5 percent from over-the-air.

For 2013, BIA/Kelsey forecasts over-the-air radio revenues should see 2.3 percent growth, or $14.7 billion, again due to the slightly stronger economy.

"As the digital marketplace continues to rise in all sectors of advertising, radio is improving its listener engagement online and benefitting from the value of its web and mobile assets," said Mark Fratrik, vice president and chief economist, BIA/Kelsey.

"Overall, the industry is still recognized as an important part of the media mix as it continues to meander around, rising slightly with the rate of inflation but not keeping up with the economy."
Posted 4:55:00 AM