Opinion: It's About Time

Consultant Jaye Albright of Albright, O’Malley & Brenner has some thoughts on HD radio in the "Breakfast Blog”:

There’s no doubt that the winds of change are blowing and a robust discussion that seems to be taking place in every radio publication right now is timely and important. 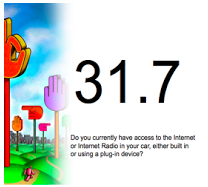 Almost one-third of country listeners report connecting to the internet in their vehicle and among those folks almost one in five spends more than two hours a day listening to “internet radio” as they drive.

We have been tracking HD Radio for many years in these studies and though the very small percentage of folks who actually owns or knows someone who has it did increase from 2.5% to 3% of country listeners sampled, even “awareness” of HD Radio was down a fraction this year and, ironically, was exactly the same percentage who claimed to have tried internet in their vehicle is aware of HD radio, just about a third of the total (31.7%). If you accept my educated guess that these most likely are the same “high tech redneck early adopters,” it’s quite probable that HD Radio today is on the radar with more or less the same level as internet radio with those people in our audience who matter most to acceptance of any new technological development. 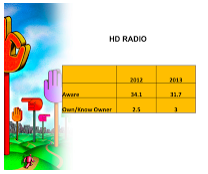 As someone who was already working in radio five decades ago, when The Beatles released “Please, Please Me,” I want to remind the skeptics that one of radio’s pioneer companies, Westinghouse Broadcasting which had started to develop FM in the 1940’s decided that it wasn’t going to be successful and silenced most of theirs in the 1950’s.

My very first job in radio was in 1962, doing nights at an easy listening (WNOB-FM) and I hosted a Broadway show tunes special each week.  A year later, I was doing mornings for an all jazz commercial FM, WCUY.  I was a musical snob back then and we thought FM was “our” place, as the great majority of people listened to AM.

We flogged FM car radio converters in an attempt to get people with only AM in their vehicles to plug our little device into their cigarette lighter and tune to an AM frequency on their radio in order to hear “FM.”

Small wonder that the “big stations” - WHK, WIXY, KYW (yes, KYW, Cleveland.  Look it up.), WJW and most other AM’s cleaned our clock in ratings and revenues.  They were the ones playing those first Beatles and Rolling Stones songs.

Jim Duncan’s “American Radio” documented it at the time as the growth of FM took decades and really didn’t begin its ascent until more than two decades after “Group W” decided there was no future in it.  It took until 1978 for FM listening levels to overtake AM’s. 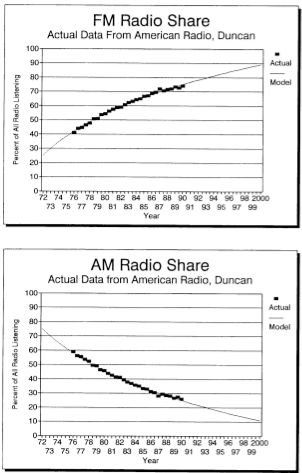 Chart Credit:  David Giovannoni: “AM Radio Listening: An Annotated Graphical and Tabular Treatise of the Audience to Broadcast Stations on the AM Band;  with Historical Perspectives and Extrapolations for the Future.”  :  The Station Resource Group, 1991.

Giovannoni’s model for the 1990’s downtrend for AM radio failed, just as Westinghouse had with FM’s potential, to foresee that very small uptick in AM share in 1989 on his 1991 chart was being driven by a talk show that had launched in Sacramento in 1984 and just went national from WABC-AM, New York, in 1988 and single-handedly reversed that slide as his show and approach spawned a new format, rejuvenating the AM band.

Programming drives usage.  And, the adoption curve doesn’t always move at the speed of Facebook and Twitter.  Just ask Bing.

Rather than pulling the plug on HD Radio while it’s still in its infancy, let’s remember how long it can take for emerging technologies to intersect with radio formats and target audience desires to move from awareness to adoption to loyalty.