R.I.P.: Gordon Stoker of The Jordanaires Was 88 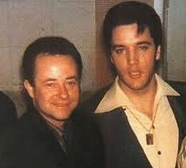 Gordon Stoker, the tenor and manager of Elvis Presley's early vocal backing group, the Jordanaires died on March 27th after a long illness at the age of 88.

Stoker and the other Jordanaires accompanied Elvis on his 1950's live appearances, including such high profile TV spots as The Ed Sullivan Show and The Steve Allen Show, as well as appearing in his early films Loving You and King Creole.