The industry was saddened Friday to learn of the death of  acclaimed voice-over artist Chris Corley.

Death was from pancreatic cancer at age 55.

It was just Thursday that radio production Benztown released its list of the Top 50 Radio Imaging voice and announced Corley would become its first recipient of the Benztown Iconic Voice Award for Lifetime Achievement in Voiceover.

Born Charles Reynard Corley in Columbia, South Carolina, Corley  preferred playing with the radio instead of doing homework. When he started actually working in radio, his father, a successful television manager, warned that the path of a radio DJ was low paying and a dead-end choice. He predicted Chris would end up in sales, according to profile story May 2016 in The Fort Myers News-Press.

The aspiring announcer went to school at Western Carolina University but dropped out after realizing he knew more about radio than some of his professors. Not much later Chris had another revelation. “If I get good at production, which is how they make their money — commercials — I could have a longer career,” he remembers thinking. “I decided to get really good at production.”

Chris loved the rock music genre and his deep, masculine voice was a perfect fit. He first moved to Fort Myers in the mid-’80s and helped get WRXK  96 K-Rock on the air. He then moved around the country a lot and ended up in Los Angeles where, along with New York City, voice-over artists were hitting it big. The West Coast city was expensive, though, so Chris moved back to Southwest Florida instead. 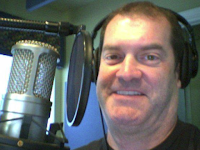 By now, it was the early ’90s and technology was changing. “I saw the future being digital, where I could eventually have a connection to upload audio files and that’s what happened,” he says.

Rock radio consultants liked Chris’ commanding pipes and had already begun using his voice on stations around the country for imaging. Imaging is what stations use for promotions, DJ intros and other interstitials in programming. Then the powerhouse Top 40 station WFLZ in Tampa called looking for something different. “It was CHR (contemporary hits radio) so it couldn’t be dark and scary, so the program director coached me on the phone,” explains Chris. “Once he put it on, everybody wanted me for CHR, too.”

His career was snowballing and he was unknowingly taking clients from an agent in New York. That agent ended up signing Chris and opening the lucrative doors to television.

From the humble beginning of voicing for regional TV stations, Chris’ portfolio grew to include work for CNN, ESPN, FOX Entertainment, Nickelodeon and the MLB Network to name a few.


Always working and trying to perfect his craft, Corley hired a voice coach to help him get into the niche market of movie trailers. It worked. Successful script reading involves more than a good voice — it involves acting and Chris says coaching helped him figure out how to “crawl into the copy.”

Big clients with high demanded Chris to travel with recording equipment. He told the News-Press once on a trip to Niagara Falls, he was staying in a big room with tile floor, high ceilings and a picture window overlooking the falls; lovely for vacation but ghastly for acoustics. At the time, he was working on a movie trailer for the Jodie Foster movie “Flight Plan,” a thriller with an intense script. “I’m reading this growly, scary script under a blanket because it echos otherwise, and the maid comes in. She screams and ran out saying something in a language I didn’t know,” says Chris, laughing at the memory. “She probably thought there was a monster under that blanket.”
Posted 1:04:00 AM