He was known for his dramatic pauses, quirky intonations and his folksiness. “Hello Americans. Stand by for news!.”  Another popular Paul Harvey radio feature was ‘The Rest of the Story.’ 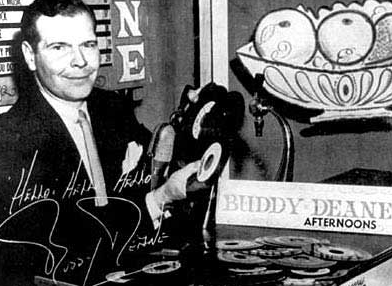 ➦In 1957...“The Buddy Deane Bandstand” debuted on WJZ-TV in Baltimore. The two-hour rock ‘n’ roll show gave viewers the chance to call in and talk to celebrity performers, which tied up telephone lines so badly the phone company was forced to ask Deane to desist from the practice.


➦In 1959...WCBS 880 AM bans “Mack the Knife” by Bobby Darin because of recent street violence

➦In 1962...The Beatles enter EMI's Abbey Road studios for their first formal recording session, rehearsing "Love Me Do" and "Please Please Me." Producer George Martin likes the former, but also insists the band record a song by Mitch Murray, "How Do You Do It."

Unhappy with the song, which they feel inferior to their own, the Beatles tape it anyway; Martin later relents after the band revamps "Please Please Me," and "How Do You Do It" will become a #1 hit for Gerry and the Pacemakers.

➦In 1975…Voice artist (Sherman, Mr. Peabody's protégé, on the animated TV series The Bullwinkle Show, and Leroy on the radio program The Great Gildersleeve) Walter Tetley died at the age of 60.

➦In 1982...The Steve Miller Band moved to #1 with "Abracadabra", which meant for the first time in seven weeks, "Eye of the Tiger" by Survivor was not #1.  Chicago moved from 5-3 with "Hard To Say I'm Sorry" and at #4--Fleetwood Mac's "Hold Me".  Air Supply reached #5 with "Even the Nights Are Better".  The rest of the Top 10:  Melissa Manchester moved from 11 to 6 with her biggest career hit "You Should Hear How She Talks About You", John Cougar Mellencamp dropped with "Hurts So Good", the Go-Go's remained on "Vacation", Crosby Stills & Nash were at 9 with "Wasted On the Way" and Sir Paul McCartney was in the #10 spot with "Take It Away".

He teamed with Dizzy Dean on TV’s Game of the Week in the ’50′s, also working the games of the St. Louis Browns & Cardinals, the LA Angels & Kansas City Royals.

He succumbed to lung cancer at age 89.

➦In 2014…Longtime Chicago broadcaster (WGN-AM, WGN-TV) Roy Leonard died of complications from an esophageal infection at the age of 83.