Pew: Trust In Military Exceeds Trust In Other Institutions 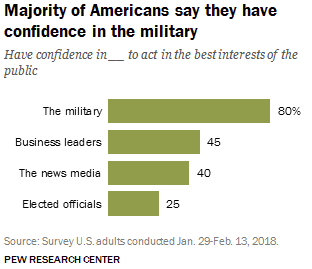 Western Europeans and Americans tend to trust their militaries much more than other national institutions.

Large majorities in eight Western European countries surveyed by Pew Research Center late last year said they trust the military, ranging from 84% in France to 66% in Spain. And on a similar survey question asked in the United States earlier this year, 80% of Americans said they have confidence that the military will act in the best interests of the public.

Other institutions received far lower marks on both sides of the Atlantic.

The U.S. survey did not ask about banks and financial institutions, specifically. But it found that just 45% of American adults had confidence in business leaders to work in the best interests of the public.

In both Europe and the U.S., elected officials and the news media received even lower marks than banks and business leaders did.

Americans’ feelings toward the news media and elected officials were more similar to those in the UK and southern Europe than those in northern Europe. Just four-in-ten Americans said they have confidence in the news media to act in the public’s best interests, and only a quarter of Americans said the same about elected officials.
Posted 3:03:00 AM