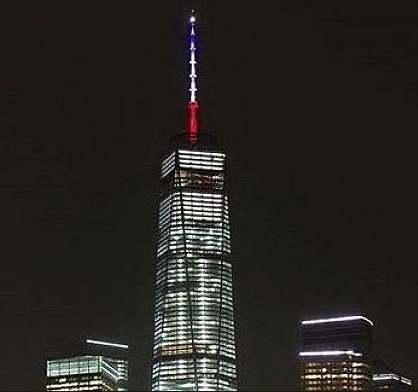 This week, the first FM station has begun test broadcasts from One World Trade Center, joining a few TV broadcasters who had already returned, GeoBroadcast Solutions said in a press release.

According to radiomagonline.com, Station owner Rahul Walia contracted with GBS “to find spectrum” in the New York market. The solution was to lease WPAT 93.1 FM’s HD-2 subchannel to support the broadcast. After two years of planning, GBS relocated FM translator W284BW from the original site in Perth Amboy, N.J., to lower Manhattan.

104.7 FM can now reach listeners in areas of the city and metropolitan area that would simply not have been possible to reach from central New Jersey,” industry consultant Bert Goldman said in the announcement.

And Walia noted, “The signal is now heard from lower Manhattan, Brooklyn and Staten Island to north and central New Jersey.”

According to the release, Walia plans to reformat the station, which broadcasts on 104.7 FM. Until the official format launches, the station will play “New York-related songs,” a press representative said.

Since re-launching from One World Trade Center, Walia reports a significant increase in audience share.

"The previous limitations of our Perth Amboy signal have been eliminated since relocated to New York City, which has enabled us to reach an essential part of the New York City market. The signal is now heard from lower Manhattan, Brooklyn and Staten Island to North and Central New Jersey," said Walia. "GBS has a wealth of experience with translator move-ins, and their guidance will be key in identifying and leveraging the right format for 104.7 FM moving forward."
Posted 3:34:00 AM