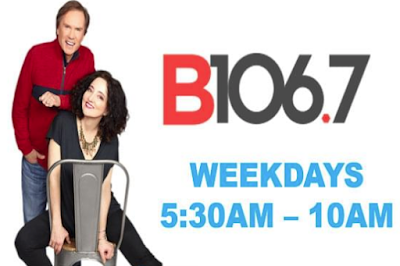 The nationally syndicated show debuted on B106.7 this week and airs on the Adult Contemporary station every Monday-Friday from 5:30am-10am.

Rick Prusator, Vice President/Market Manager, Cumulus-Columbia, SC, said: “We have considered the opportunity of adding BOB & SHERI to our great lineup at B106.7 for some time and our entire team is excited to make it a reality.”

Sheri Lynch, Co-Host, “Bob & Sheri” said: “B-106 has one of the best signals and most well-known call letters in the Southeast. Columbia is a city that means a lot to me – friends, family, and killer college football. We’re so happy to be supported by the amazing Cumulus team there. GM Rick Prusator and PD Steve McKay have a real vision for the station. Mike McVay and John Dimick at corporate have been fantastic. We’re honored to be on board.”

Bob & Sheri is hosted by Bob Lacey and Sheri Lynch and has received numerous awards, including nine NAB Marconi Award nominations, five Gracie Awards, and multiple regional, state, and local honors. The show is syndicated by Now! Media, LLC to 50 stations across the U.S. and around the world on Armed Forces Radio.
Posted 4:04:00 AM