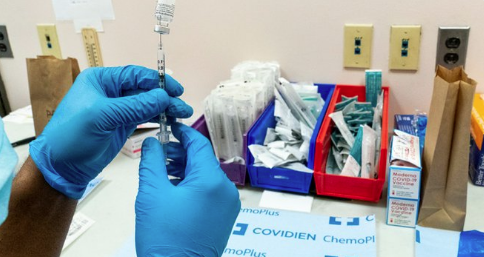 PFIZER COVID-19 VACCINE EXPECTED TO BE APPROVED FOR KIDS AGES 12 TO 15 BY NEXT WEEK: The Food and Drug Administration is expected to approve use of Pfizer's Covid-19 vaccine in kids ages 12 to 15 by next week, the New York Times first reported on Monday. Pfizer's vaccine is already approved for those ages 16 and older, and the side effects seen in these minors are similar to those experienced by adults. This expected expansion of eligibility for at least one vaccine for those as young as 12 comes as vaccinations in the U.S. have begun to fall, even as variants continue to spread. The Centers for Disease Control and Prevention said the average number of doses per day was down 27 percent last Tuesday from a high of 3.26 million doses on April 11th. Still, the average number of new cases per day in the U.S. has fallen below 50,000 for the first time since October.

President Biden responded to a question about when the U.S. will reach herd immunity with COVID-19 by urging Americans to get vaccinated: "My plea to everyone: get vaccinated now, please." pic.twitter.com/lMN16b6LgO


➤AT LEAST 20 KILLED IN COLLAPSE OF ELEVATED SECTION OF MEXICO CITY SUBWAY: At least 20 people were killed and some 70 injured in the collapse of an elevated section of Mexico City's subway, causing a subway car to plunge toward the ground on a busy roadway late last night. Rescuers were searching in the wreckage for any other victims as a crane held up the dangling subway car. Mayor Claudia Sheinbaum said that a "support beam gave way" as the subway car was passing over it. The collapse took place on the Mexico City Metro's newest line, which was built between 2006 and 2012. There had been allegations of poor design and construction on it.

#UPDATES At least 15 people are killed and around 70 others injured when an elevated metro line collapses in Mexico City as a train is passing
Emergency services are working to rescue victims from the carriages at the Olivos station https://t.co/OXpsZ88Qoy pic.twitter.com/XOHH5jG3cl

➤BIDEN RAISES REFUGEE ADMISSIONS CAP FROM TRUMP-ERA HISTORIC LOW: President Biden yesterday raised the cap on the number of refugees allowed into the U.S., quadrupled from the historic low set during former President Donald Trump's administration. Biden raised the cap to 62,500 refugees this fiscal year, the increase coming weeks after he came under criticism for a delay in upping the number. The increase also paves the way for Biden to increase the cap to 125,000 for the 2022 fiscal year, according to AP.

➤FUNERAL HELD IN NORTH CAROLINA FOR ANDREW BROWN JR.: The funeral was held yesterday for Andrew Brown Jr., a 42-year-old Black man who was shot and killed by North Carolina deputies on April 21st as they were serving drug-related search and arrest warrants at his house in Elizabeth City, sparking days of protests. The Reverend Al Sharpton delivered the eulogy, during which he called for the release of the police body camera footage of the shooting. Declaring, "I know a con game when I see it," Sharpton said, "Let the world see what there is to see. If you’ve got nothing to hide, then what are you hiding?" A judge ruled last week that the video would not be made public for now to avoid interfering with an ongoing state investigation.
Civil rights attorney Ben Crump, who is representing Brown’s family, also spoke, saying, "[B]ecause Andrew cannot make the plea for justice, it is up to us to make the plea for justice." Additionally, relatives of George Floyd, Eric Garner and Daunte Wright, other Black men killed by police, spoke at the service.  Brown's family has said an independent autopsy they commissioned found Brown was shot five times, including once in the back of the head, and they say a portion of bodycam video they privately viewed showed Brown was trying to drive away when he was shot.

Bill and Melinda Gates announce they are getting divorced. https://t.co/kUvW9FcmEi

🍺N.J. OFFERS FREE BEER TO THOSE WHO GET COVID-19 VACCINE:  One week after West Virginia announced the state would be giving $100 savings bonds to residents aged 16 to 35 who get a Covid-19 vaccine, New Jersey announced a different giveaway approach to try to encourage vaccination. Governor Phil Murphy announced the "Shot and a Beer" effort yesterday on Twitter, in which residents ages 21 and older who get vaccinated will be able to get a free beer at one of over a dozen breweries that have teamed with the state. The offer will be available through May for any eligible person who gets at least their first vaccine dose. Another part of New Jersey's vaccination effort is called "Grateful for the Shot," in which the state is partnering with religious leaders so that worshippers can go straight from services to vaccination sites.

Restaurant owners are blaming bigger unemployment benefits for the current restaurant labor shortage. The calculus for workers, though, is far more complex. https://t.co/DIAYLSYCOE

➤SALES ON WORK CLOTHES CLIMB AS PEOPLE RETURN TO OFFICE:  Some cities have started sending employees back to the office as COVID-19 cases decrease, and in turn the sales of business attire have increased. The Wall Street Journal reports that Haggar Clothing Co. employees are working overtime to make sure retailers get enough blazers and trousers, and L.L. Bean, Inc. says its sales of pants with zippers and buttons have recently begun outselling elastic-waistband ones. Retailers also say that many shoppers are looking for cross-over clothing items that can serve several purposes, and they're reporting upticks in foot traffic as pandemic restrictions ease and people slowly return to in-person shopping.

I hope all the protesters are happy because obnoxious dreadful morons like this woman are following their instructions. https://t.co/MJezxKiMj7

➤WHY IT FEELS SO UNCOMFORTABLE TO RESUME YOUR LIFE AFTER YOUR VACCINE: The Centers for Disease Control and Prevention (CDC) says it’s ok to start gathering indoors with fully vaccinated people without wearing a mask or keeping six feet of distance if you are also fully vaccinated, as well as a bunch of other activities. So why does it feel weird to make plans once you’ve been fully vaccinated, and why does it feel weird to tell other people about those plans? Monica Gandhi is an infectious disease specialist at the University of California, and she says it’s because the country has had a “snitch-based, shame-based approach” in which people have been shamed and called out for engaging in activities that are riskier, even after the CDC says fully vaccinated people can safely do certain things. As a result of all the shaming we’ve internalized the idea that certain activities are risky or bad, including indoor dining, traveling, and going to the gym. Gandhi adds, “Now we’re actually trying to message confidence in the vaccines, but that shame and that fear and that embarrassment lingers.” But the reality is that showing that you’ve been vaccinated and are able to enjoy certain activities again, unmasked and distanced, can give friends and family members confidence in the vaccines, and could even motivate people who are nervous about the shots to go out and get vaccinated. Science says the vaccines are very effective at lowering the risk of death and severe disease from COVID-19—so go out and restart life without worrying about being shamed if you’ve had both your shots and waiting the appropriate amount of time.
🍺GERMANY CANCELS OKTOBERFEST FOR SECOND YEAR: Germany won't be hosting its traditional Oktoberfest celebration for a second year because of the pandemic. Bavarian state Premier Markus Soder and Munich Mayor Dieter Reiter shared the cancellation news Monday. More than six million people from around the world usually come to Munich each year to celebrate Oktoberfest, which is held in September and October. It was canceled last year for the first time since World War Two.
🏀WESTBROOK BECOMES ONLY PLAYER IN NBA HISTORY WITH MULTIPLE 20-ASSIST, 20-REBOUND GAMES: Washington's Russell Westbrook had a career-high 21 rebounds and a career-high-tying 24 assists in the Wizards' 154-141 win over the Indiana Pacers last night, becoming the only player in NBA history with multiple games with at least 20 assists and 20 rebounds. Westbrook has now done it twice, and Wilt Chamberlain did it once, the only other player to have done it at all. Additionally, Westbrook scored 14 points last night, for his league-leading 32nd triple-double of the season. He now has 178 career triple-doubles, just three short of Oscar Robertson's record.


🏀ANTHONY NOW IN 10TH PLACE ON NBA'S CAREER SCORING LIST: The Portland Trail Blazers' Carmelo Anthony moved into 10th place on the NBA's career scoring list last night (May 3rd), passing Elvin Hayes. Anthony moved past Hayes' 27,313 career points with a three-pointer with 11:09 left in the second quarter. Anthony finished the game with 14 points, bringing his total to 27,318, in Portland's 123-114 loss to the Atlanta Hawks. Next up on the all-time scoring list for Anthony would be Moses Malone, who has 27,409 points in ninth place.

⚾DODGERS' PITCHER MAY TO HAVE TOMMY JOHN SURGERY: Los Angeles Dodgers pitcher Dustin May is done for the rest of the season, with an MRI yesterday morning revealing that he needs to have Tommy John surgery. The 23-year-old May had been placed on the 10-day injured list Sunday, a day after he left a game against the Milwaukee Brewers with pain in his arm after throwing just 27 pitches. He will have the surgery next week.

⚾MARLINS PITCHER CAMPBELL SUSPENDED FOR 80 GAMES AFTER TESTING POSITIVE FOR STEROID: Miami Marlins rookie pitcher Paul Campbell was suspended 80 days Monday for violating MLB's drug program after he tested positive for an anabolic steroid. The 25-year-old said he'd never knowingly taken the drug, saying in a statement, "Due to the fact that I do not know the origin of how this substance has entered into my system, I currently have no viable defense."

Honoring the life of three-time Indianapolis 500 champion Bobby Unser, who has died at the age of 87.

Two years ago, we got the chance to speak with the racing legend. pic.twitter.com/A4ePSqGpoK


🏎THREE-TIME INDY 500 WINNER BOBBY UNSER DEAD AT 87: Racing great Bobby Unser, a three-time winner of the Indianapolis 500 who came from a racing family, died Sunday (May 2nd) at his New Mexico home, the Indianapolis Motor Speedway said. He was 87. Unser was one of six members of his family to race in the Indy 500. His brother Al Unser won it four times -- making them the only pair of brothers to win the iconic race -- and his brother's son, Al Unser Jr., won it twice. After his racing days ended, Unser had a 20-year broadcasting career.
Posted 4:26:00 AM