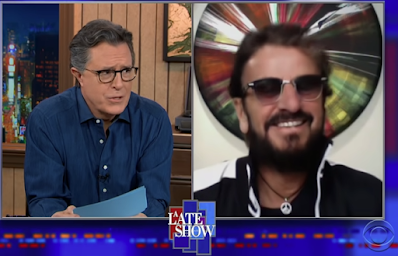 They’re two classic questions: “What’s your favorite song?” and “what happens to us when we die?”

Ringo Starr is an expert on at least one of those issues, but he weighed in on both with Stephen Colbert, reports The NY Daily News.

On a Friday episode of “The Late Show,” host Colbert went through 15 rapid-fire questions with the Fab Four drummer, a Rock and Roll Hall of Famer with the Beatles and on his own.

“You get one song to listen to for the rest of your life. What is it?” Colbert asked Starr. The 80-year-old musician quickly replied “Come Together” one of the Beatles most popular songs.

“There’s lots of favorites, but if you want one, ‘Come Together’ can’t be bad,” Starr explained of the John Lennon track that kicked off the “Abbey Road” album. “I just think it worked perfectly with the band and the song and John being John. I loved that moment.”

In the segment, Colbert also asked Star about his thoughts on the afterlife.

“I think we go to heaven,” Starr said. “Heaven’s great, but you don’t stay there too long; you just gotta get yourself together again and come deal with all that s--t you didn’t deal with last time you were here.”