US spot radio revenues edged up 1% year-over-year to reach $3.76 billion in Q2, per a September 2012 report [pdf] from the Radio Advertising Bureau (RAB). Off-air revenues grew more rapidly, increasing by 4%, though digital was the fastest-growing segment for the first half (H1) of 2012, up by 7%. (The report excludes network radio data for Q2 as the cooperating threshold representing 90% of revenues was not reached.) 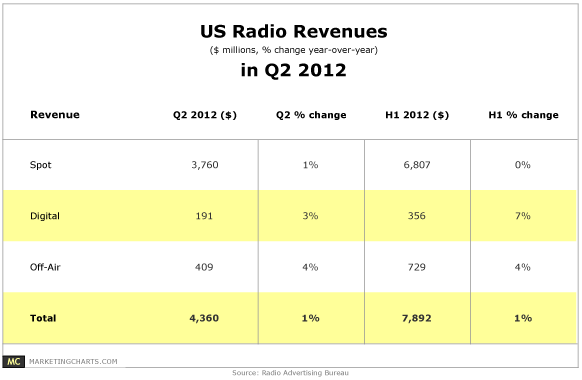 Despite digital’s above-average growth, the segment accounted for just 4.5% of combined spot, digital, and off-air revenues in H1. Spot revenue, which made up 86% of combined revenues for those 3 segments, was flat year-over-year in H1. (Marketingcharts.com)
Posted 10:30:00 AM