Twenty-six percent of local businesses say they are ‘very’ or ‘extremely’ likely to participate in an online deal in the next six months.

BIA/Kelsey, advisor to companies in the local media industry, forecasts U.S. consumer spending on online deals (including daily deals, instant deals and flash sales) to reach $3.6 billion in 2012, an increase of 86.9 percent over 2011. BIA/Kelsey projects 23 percent growth in deals spending in 2013, followed by mid-single-digit growth in later years. This translates into deals spending climbing to $5.5 billion in 2016. 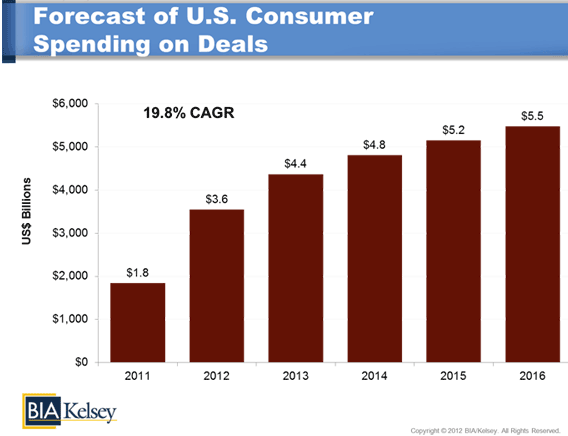 “After astronomical growth in 2012, the online deals marketplace is showing signs of maturity,” said Peter Krasilovsky, vice president and program director, BIA/Kelsey. “There has been consolidation in the space, deal conversion rates may be suffering due to over-familiarity and the market may be near saturation. Still, market leaders continue to exhibit growth as market awareness and penetration spread.”

Going forward, BIA/Kelsey envisions online deals will become an anchor for a platform of non-advertising small-business services. These services include instant mobile deals, loyalty products, promotions, reputation management, transaction processing and ecommerce. While these services have already been introduced to the marketplace, they have not made a significant impact on overall deals revenues to date. Eventually, BIA/Kelsey expects they’ll become an anchor element in the broad local play.
Posted 3:06:00 AM