Meet 'The Most Interesting Man In The World' 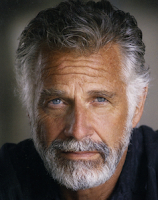 He led a flock of endangered cranes across Siberia on a motorized hang glider. He dominates opponents in judo. He rode a Harley across the deck of a battleship, and he's been photographed riding a horse ... shirtless.

He's Russian President Vladimir Putin, and for all his eclectic activities — even his classical piano training — he is not "The Most Interesting Man in the World."

That title belongs to actor Jonathan Goldsmith. Actually, the trademark technically belongs to beer maker Dos Equis — but Goldsmith does play him on TV.

"I've been consulting with him for some time," Goldsmith tells weekends on All Things Considered host Guy Raz. "I get regular reports from Sarah, who says he can see his house from hers."