CBS’s Lee Cowan, during a piece for CBS’s Sunday Morning, says the legendary Dodger broadcaster still gets "goose bumps" from doing play-by-play - as he has for more than six decades:

A bobblehead figure of Vin Scully is a good-natured tribute to the legendary baseball announcer's years of service to a storied team. Lee Cowan takes us out to the ball game for some Questions-and-Answers: 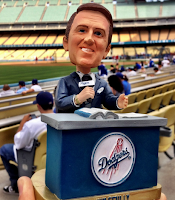 It was a perfect summer evening for baseball - and on this night in Los Angeles, thousands got to Dodger Stadium a little early - for a handout.

It was Bobblehead Night - popular at every stadium. But it wasn't a player being "bobbled"; it was a voice: Legendary Dodger announcer Vin Scully.

"This man is the reason why I come to baseball games. I love Vin Scully," said Denise Robertson.

"It's time for Dodger baseball!"

That melodic voice has been the soundtrack of the Dodgers since 1950, when they were still the Brooklyn Dodgers. And at 84, Vinnie (as the players call him) is still at it.

"It's been a sport that I've loved ever since I could throw a ball," he said.

"So you still get goose bumps?" Cowan asked.

"Yeah, still do. That's really the thermometer for my love affair, my fever. As long as I get the goose bumps, I know that I should still be doing it."

From his perch up behind home plate, Scully isn't just an announcer - he's a storyteller. He uses the English language the way Casey wielded a bat.

"Fernando Valenzuela has pitched a no-hitter. If you've got a sombrero, throw it to the sky!"

Many consider him the poet laureate of baseball - a description he seems uncomfortable with.