The Daily News' bid to reposition its website as a nationally-facing product appears to be paying off, according to a story atcapitalnewyork.com. 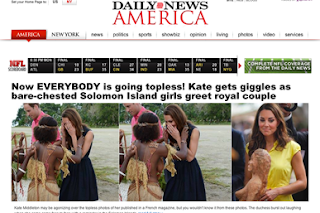 Since the redesign and relaunch of the News homepage as "Daily News America" at the beginning of July, unique visitors to nydailynews.com have risen 21.6 percent to 19.1 million in August from 15.7 million in June, according to metrics from the web measurement firm comScore that the News circulated internally today.

That puts the Daily News in the same digital ballpark as bigger papers like USA Today, The Washington Post and The Los Angeles Times, according to a comScore ranking compiled by News management.

In print, the News has the fifth highest circulation in the country, but almost all of its distribution is in the New York area. By tailoring its website to a wider audience through a combination of photo-heavy celebrity news and re-write coverage of the most click-friendly national stories of the day, the News is hoping to capture advertisers that wouldn't necessarily be compelled to position their brands alongside local fare.

"We can now say with confidence that we are a national player," wrote News president Bill Holiber and editor-in-chief Colin Myler in an effusive memo to staff on Monday. "Every aspect of the content being created, whether it be national, international or local, has had a significant impact on our great web audience growth. From covering the Aurora cinema massacre to the Sandusky trial, from the TomKat divorce to the Empire State shootings, we have consistently led the field with fast, accurate and intelligent reporting."

Their note also included the requisite jab at the competition: "In case you were wondering, the New York Post website does not figure in the ComScore premier league of players."

News chatter has it that the Post is cooking up its own national web offering, but Post sources were unable to confirm that this is true.