Less than three months after a tearful Ann Curry bid goodbye to NBC’s “Today” show, it’s the network’s turn to cry, according to the NYPost.

The once-dominant morning powerhouse is falling even further behind in the ratings race after forcing 15-year veteran Curry aside and replacing her with freshman Savannah Guthrie.

ABC’s ascendant rival “Good Morning America” looks set to win its third consecutive week in a row — not just in total viewers but also among core viewers ages 25 to 54, according to preliminary ratings.

NBC has long crowed about its smooth transitions in the news division, from Katie Couric to Meredith Vieira at “Today” and Tom Brokaw to Brian Williams at “Nightly News.” 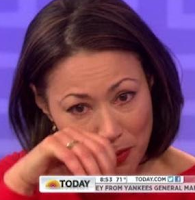 But call it the curse of Ann Curry.

The decision to push her off the couch after just a year on the job — sparking outrage among her fans — has backfired.

Even with the two-week boost from Olympics — which was supposed to give “Today” and NBC a leg up on the competition — ratings for the show were down nearly 7 percent during the summer.

In the 10 weeks leading up to her teary signoff, Curry averaged 4.94 million total viewers and 2.1 million in the core 25-to-54-year-old audience, according to Nielsen figures.

In the 10 weeks after her departure, including the Olympics, NBC fell to 4.6 million viewers and 1. 9 million in the key audience group.

Meanwhile, “GMA” topped “Today” in total viewers with 4.7 million during the 10-week period ended Sept. 9. Among 25-to-54-year-old viewers, it trailed with 1.75 million, although it has also been narrowing that gap as well.