Perks: Every Yahoo Employee Gets A Smartphone 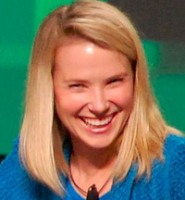 New Yahoo CEO Marissa Mayer just sent an email to all of Yahoo's full time and part time employees in the US, promising them a new Apple, Samsung, Nokia, or HTC smartphone.

"People are happy," says a source at the company.

Mayer has now put that plan into motion through a program Yahoo is calling "Yahoo! Smart Phones, Smart Fun!"

BI learned about this plan from an internal memo, which we received from one source and confirmed with another.

Through the program, Yahoo employees will have a choice of phones: iPhone 5, Samsung Galaxy S3, HTC One X, HTC EVO 4G LTE, or Nokia Lumia 920.

Yahoo is also going to pay its employees data and phone bills.

Giving employees blazing fast new smartphones will certainly boost morale at Yahoo – just like free food will – but that's not the whole point.

According to the memo, the idea is for Yahoo employees to use the phones that Yahoo users are using.