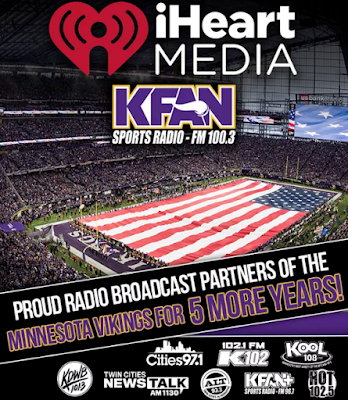 Nineteen years on the same flagship radio station will extend another five years as the Minnesota Vikings agreed to a contract extension with KFAN 100.3 FM and KTLK 1130 AM.

The five-year extension will keep the Vikings' radio home at KFAN for through the 2024 season, with the upcoming 2020 season the 20th consecutive on "The Fan," reports bringmethenews.com.

The agreement includes game-day coverage in addition to radio shows co-produced by the Vikings and KFAN that air on 100.3 FM as well as being available in on-demand form on Vikings.com.

Both organizations are dedicated to innovation and excellence which makes this partnership so unique and valuable," said iHeartMedia Minneapolis President Jeff Tyler, in a statement.

Leber, a former Vikings linebacker, is the sideline analyst while Coleman, who punted for the Vikings from 1978-87, serves as the pre- and post-game analyst.

The Vikings Radio Network consists of 33 stations in Minnesota, in addition to nine in North Dakota, six in South Dakota, and four in Wisconsin.
Posted 2:06:00 AM