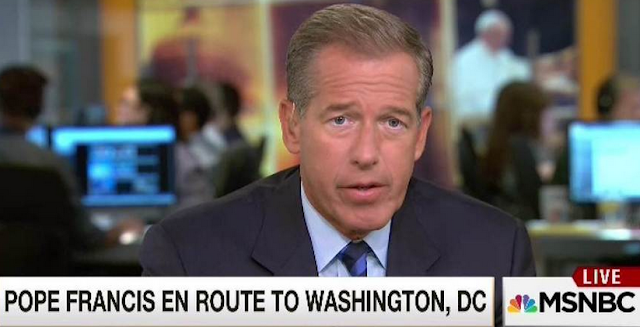 Williams' coverage of the pope's arrival Tuesday in the United States was watched by 526,000 viewers from 3 p.m. to 5 p.m. Eastern, according to Nielsen, a 57% lift over what the cable news network has drawn in those hours over the previous four weeks. The report was the first time viewers had seen Williams in the TV news anchor chair since February, when he was suspended by the network for making false statements on and off the air about his 2003 reporting on the U.S. invasion of Iraq.

NBC News is using the coverage of the pope's visit to launch Williams in his new role of breaking news anchor on MSNBC. The network removed Williams from the anchor job at "NBC Nightly News" in June, replacing him with Lester Holt.

MSNBC's audience was the smallest among the three cable news networks providing continuous coverage of the pope's arrival at Joint Base Andrews outside of Washington, D.C. But the increase was in line with the 59% lift for CNN's audience of 920,000 viewers. Both networks typically see their audiences grow during live coverage of major news events.

Fox News had the most viewers with 1.2 million, down 12% from the prior four-week average but in line with what it typically draws in those hours with regular programming.
Posted 3:45:00 AM